The MIT blackjack team has been known in gambling world since 1979 when the group of MIT (Massachusetts Institute of Technology) students decided to work together in order to win blackjack card game in all big casinos.

It was MIT team who developed card counting strategy and used it professionally: it was not considered to be a technology before and believed to be the method of blackjack cheating. 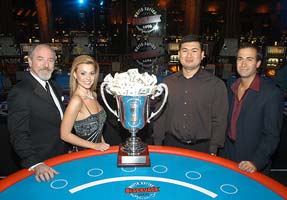 MIT team was often banned from casinos because of that superstition, and its members found other ways to devote themselves to their favorite card game: they wrote books about card counting, gave lectures and seminars for everyone interested in blackjack and continued playing.

The year of MIT blackjack team birth is believed to be 1979 when 3 MIT students decided to create the gambling courses for everyone who was interested in poker and blackjack. They taught and studied the game of blackjack by themselves and went to Atlantic City to use their knowledge in practice and see whether it worked. But one professional gambler (named Dave) noticed them and suggested them to create a team which would play blackjack using particular strategies: Roger Demaree, J.P. Massar, Jonathan and Dave were the original 4 members of MIT team and they gathered other MIT students to be players. Read more at HolyMolyCasinos

In 1980 J.P. Massar meets Bill Kaplan, the leader of a successful blackjack team, and asks him to observe the MIT team play in Atlantic City. It was really awful because the team did not use one strategy, argued over unimportant things and spent not much time at blackjack table actually.

So, Bill Kaplan understands all team's problems and agrees to work with them if they are serious about what they do and if they use a definite system and technology. In August, 1980 ten people went to casinos with $89 000 and were able to double this sum in ten weeks: it was a real success and a sign that the MIT blackjack team goes right direction!

The MIT blackjack team's members are card counters first of all, but they use other strategies too: Al Francesco's big player and shuffle tracking are successfully used by them as well. Using such strategies, MIT team was able to beat many casinos out of millions of dollars!

The history of MIT blackjack team was described in gambling books and shown in films, such as 21 and The Last Casino for example. Ben Mezrich, the former MIT team member, revealed the secrets of its work in his bestselling book Bringing Down the House.