They met in 1974 and changed the history of blackjack forever! Being impressed by his blackjack skills, the famous and respected blackjack guru Al Francesco had invited Ken Uston to his blackjack team. Thanks to this fact, Ken Uston began his blackjack career and became the most popular blackjack player of 1970s-80s.

Today his name is widely known in gambling world: a blackjack guru, a master of disguise, a bestselling gambling author, a manager of his own blackjack team, a successful card counter, a nightmare of all casinos - these words describe the life of Ken Uston in full. 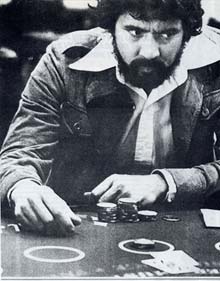 Ken Uston always liked blackjack and devoted a lot of time to playing it in casinos. When he met Al Francesco and had been invited to his blackjack team in 1974, Mr. Uston was a successful blackjack player already. He had been working at Francesco's team for 3 years and decided to organize his own team in 1976: Uston's team beat casinos out of millions of dollars and, finally, was banned from many casinos of Las Vegas and Atlantic City.

The year of 1977 prepared an unpleasant surprise for Al Francesco: Ken Uston had published his first book The Big Player where he revealed all the secrets of Francesco's blackjack team and methods they used for winning at blackjack! The book had become a bestseller at once, and Ken Uston became very popular in gambling world.

Ken Uston is the author of the following gambling books:

He always considered himself being a passionate blackjack admirer, and he used every chance to play this game: even when he studied at Harvard University and then worked as the vice-president of the Pacific Stock Exchange he always went to Vegas for spending time in casinos.

Ken Uston is also known as a person who won a case against of Atlantic casinos as for the right of gamblers to use the strategy of card counting: they do not use any special computer devices for that, so, card counting can not be called being a method of cheating.

In 2003, Mr. Uston was called to be one of 7 initial members of the Blackjack Hall of Fame for his contribution to blackjack card game. He had received this status posthumously: Ken Uston died in 1987 because of heart attack.

Today, one of Ken Uston's daughters leads the official website devoted to her father; it is possible to find all information concerning this blackjack expert there.