British variation of twenty one game (most known as blackjack) is called Pontoon. As well as Blackjack this game derived from the French game Vingt-et-un. The game is pretty similar withblackjack. It can be played by 2 to 8 players at one table. Standard 52 card deck is used here. Players can use money or chips for making bets.

The main idea is still the same as in blackjack - you need to reach 21 not exceeding this limit. But blackjack pontoon has its own rules and special terms, which are different from standard American blackjack rules.

Cards in pontoon have the same value as in traditional blackjack: cards from 1 to 10 are at the same value as their number. Faced cards are 10 points each. The Aces are 1 or 11, depending on how much you have left till exceeding the limit of 21 points.

Here are the pontoon combinations in order from the most powerful to the weakest one:

The pontoon has its own vocabulary! 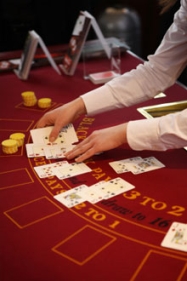 "Twist" and "Buy a card". "Buy a card" is similar to "double down" in blackjack. If the dealer gave one card to a player, the player can buy one more card. The player can buy from one to 4 cards, each time adding a bet that must be between the minimum and maximum limit of the game.

"Stick" - means that player declines another one card (blackjack's "stand").

"Split" has the same name and meaning as in blackjack. The player puts his pair of the same cards on the table, face up. The player puts additional bet on the second hand and the dealer gives one more card to each of player's hands. If one or both of new cards are the same as in splitted pair the player can split them again.

Blackjack pontoon has not only the dealer, but a banker. The pontoon banker is a player, who has been chosen randomly from the players (by cutting the highest card from the deck).

At the beginning of the game, the banker starts spreading cards from the player to the left of the dealer. All cards are faced down. All players can look at their cards except the banker. After that, starting from the player to dealers left as well, only this time clockwise, players, except the banker, are allowed to place their bets in front of them. Limits of the bets must be agreed before the game starts. Each player can bet any amount between stated minimum and maximum bets of the initial game.

The game starts clockwise, from the player to the left of the dealer.

The dealer now can spread second card to the players. Faced down, the same as the first one. After that players can check their cards, and if the banker has a pontoon he\she collects doubled amount of bets from each player. If no one has a pontoon the game proceeds.

After one turn for each player except the banker, the banker turns his\her cards face up. After that the banker takes as many cards as he\she needs, and they are all face up.

If no one gets a pontoon for the game, the dealer puts used cards to the bottom of the pack. Next game begins without shuffling. If there was a pontoon in previous game - the dealer shuffles the cards.

The banker can sell the bank to another player for agreed price, and the player that bought the bank becomes a banker.

There are many variations of blackjack pontoon rules, with only few and small differences in the rules.

Many online casinos have blackjack pontoon.